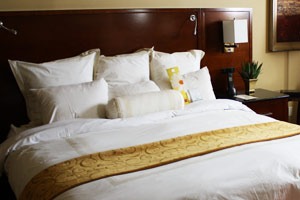 One of the best things about traveling in Wisconsin in the fall is the abundance of great deals. Lodging properties around the state offer special discounts and package options to entice travelers. Here is a list of Wisconsin destinations offering fall packages, deals and discount for you to take advantage of:

As the wind takes the last leaves off the trees, many birdwatchers head indoors for the season. That’s too bad. Some of the most exciting birdwatching of the year comes in late fall. If you enjoy watching large waterfowl, then you need to be in Wisconsin in October and November. Here are two of the best places to see swans, ducks and geese. 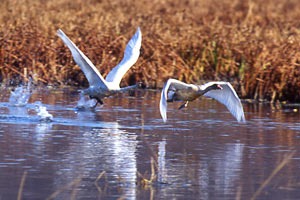 Wisconsin Great River Road – Tundra Swans and Diving Ducks
At a number of places along the Wisconsin side of the Mississippi River, tundra swans stop to rest before heading further south for the winter. Birds arrive in late October or early November and stay for two to three weeks. The best spots to see these birds are Lake Onalaska and the mouth of the Buffalo River near Alma.  These huge white birds are hard to miss. The swans eat aquatic plants, including the roots. Their singing is similar to the call of a sandhill crane. Keep your eye on the skies over the Mississippi River this fall.

Another sight to behold in late fall on the Mississippi River is the migration of diving ducks. Diving ducks begin their trip south long after mallards, teal, wood ducks and other less cold tolerant species have left for warmer climates. There are many kinds of diving ducks found along the Mississippi River. Species include canvasbacks, bluebills, buffleheads and redheads. Diving ducks are easily spotted as they congregate in large rafts out in the middle of the Mississippi River’s largest pools. Their black and white feathers show up even in the foulest late fall weather. The best place to see these magnificent birds is between Prairie du Chien and La Crosse, particularly around the tiny communities of Ferryville and DeSoto. 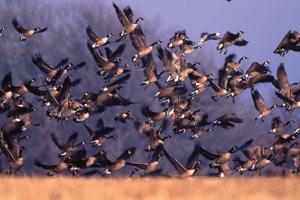 Horicon Marsh in Dodge County – Giant Canada Geese
Throughout the fall, the Horicon Marsh is a flurry of activity. Every variety of waterfowl, shorebird, songbird and raptor passes through this huge cattail marsh. But as the leaves fall off the trees and the temperatures decline, the marsh is left to its most famous inhabitant: the Canada goose.

Tens of thousands of giant Canada geese inhabit the Horicon Marsh in late fall. The birds roost on the marsh at night and feed in surrounding cornfields during the day. In the morning, huge flocks of birds stream out of the marsh, forming immense V’s that grow and grow as they rise above the wetlands. A pre-dawn trip to the marsh will give you a view of this spectacle. But the experience is more than visual. The sound of the countless geese is unlike anything you’ve ever heard. Imagine thousands and thousands of voices all singing at the same time. Don’t miss this incredible fall birding experience.

Unique places to relax and do your holiday shopping

Holiday shopping can sometimes feel like a chore. Traffic, crowds and long lines can put a damper on your holiday spirit. But a getaway to one of these three destinations is a fun way to get your holiday shopping out of the way. Knock things off your list and relax in these laidback communities. 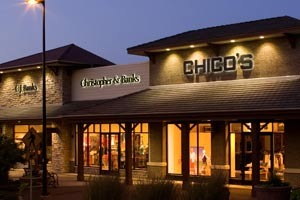 Middleton
Middleton is one of the best places to live in America. CNN/ Money Magazine’s Best Places to Live ranked Middleton #4 in 2009, #7 in 2005 and #1 in 2007. In 2011, Middleton made the list again at #8. One of the reasons why Middleton is such a great place to live is the community’s huge variety of businesses, including retailers. There are numerous shops and galleries located throughout this friendly community. The charming downtown is home to a delightful mixture of old and new. A short walk from downtown, Greenway Station features 51 acres of shops and restaurants surrounded by covered walkways and a courtyard. Nearly all of Middleton’s hotels are located just steps from one of the community’s shopping areas. Add it all up and you have the perfect shopping getaway. 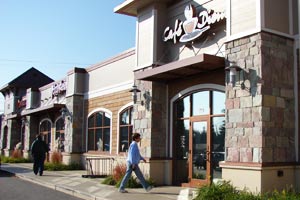 Onalaska
Located on the Mississippi River and the Great River Road, Onalaska is a popular destination for fishing, boating, paddling and exploring the river. In addition to great recreational offerings, Onalaska has the largest shopping district within a nine-county area. Onalaska’s retailers attract people from communities in both Minnesota and Iowa. The largest shopping center in Onalaska is Valley View Mall, which is home to more than 90 specialty shops and four major department stores. Another reason for shopping in Onalaska is convenience. The majority of Onalaska’s retailers and lodging properties are located right along I-90, making it easy to get around. If you’re looking for a relaxing shopping getaway, Onalaska is for you. 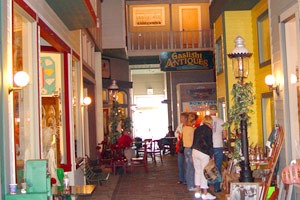 Minocqua in Oneida County
When most people think of Minocqua, they think of the area’s many cabins, vacation homes and lakeside resorts. But Minocqua is also one of the most interesting places to shop in the Northwoods. Dozens of eccentric and entertaining shops offer everything from kayaks to Czech crystal. Go hunting for antiques or sample some luscious, handcrafted fudge. Take a stroll through galleries selling pieces with a Northwoods flair. Visit a year-round Christmas shop. Peruse rows of new Harley Davidsons. Saunter through the bath and body shop. Next time you’re in the Northwoods, discover delightful variety in Minocqua.