Winter is probably the best time of the year for catching northern pike in Wisconsin. Not only are pike hungry throughout the winter, they’re plentiful on the majority of Wisconsin’s ice fishing waters.

If you’ve never tangled with a pike while ice fishing, you’re in for a real treat. Staring at the hole in the ice with the fishing line dancing about, your imagination runs wild thinking about what monster might be hooked. And, unlike other fish species, northern pike put up quite a fight during the winter. A hooked pike doesn’t surrender easily.

So, how do you experience this ice fishing thrill for yourself? Here are ten tips for catching more pike this winter in Wisconsin. 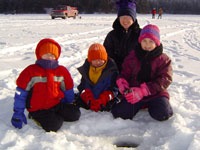 So, where are some of the best places to catch a lunker northern pike? In Wisconsin, there are a number of options. One is the Boulder Junction[link to boulderjct.org  ]. Although the community is famous for its musky fishing, many of the 194 area lakes also harbor monstrous pike. And, because most local anglers focus their attention on musky, the pike in Boulder Junction have had a chance to grow big – real big.

Oneida County is home to hundreds of lakes. During winter, the county’s largest lakes and flowages are your best bet for northern pike. The massive Willow Flowage in western Oneida County is an excellent place to start your search for hungry pike.

Located along the Mississippi River, Onalaska should be on every pike hunter’s radar. The 7,700-acre Lake Onalaska hides some giants. The abundant baitfish make these pike grow fat and the river current makes them strong. Be ready for a fight!

Oshkosh on Lake Winnebago might be the best place in the state to catch a true trophy pike. At more than 137,000 acres, Lake Winnebago offers pike lots of room to grow. Along Oshkosh’s shoreline, you’ll find North Asylum Bay, South Asylum Bay and Millers Bay, all top pike-producing spots.

Good luck with your pike hunting this winter!