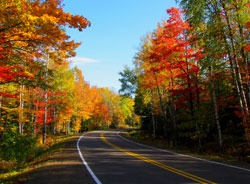 Fall is the most scenic season in Wisconsin. When the leaves start changing, it’s time to start thinking about hopping in the car and experiencing the season’s splendor. Here are four Badger State drives you don’t want to miss this fall.

Just east of Stevens Point near the community of Amherst, you’ll find Rustic Road #17. The route begins south of Amherst and runs for 2.7 miles through a landscape of hills, rugged terrain, colorful forests and autumn-hued fields. One of the highlights of Rustic Road #17 is the bridge over the Tomorrow River. Here, the river makes its way through a field of boulders. It’s a great place to stop and snap a photo or just soak up the scenery. For bicyclists, the 30.5-mile Green Circle Trail in nearby Stevens Point is a must-ride in the fall.

Located just north of West Bend, the Northern Unit of the Kettle Moraine State Forest is the ideal place to enjoy fall color. The glaciers that passed through the area 10,000 years ago left in their wake a landscape of low, rolling hills that are breathtaking in the fall. Take a winding drive around and through the forest for super scenery. Stop at the New Fane Trail Area for great hiking and wildlife viewing. Bring your camera because the views will be incredible.

Onalaska sits at the midway point of the Wisconsin Great River Road, a designated National Scenic Byway that runs for 250 miles along the Mississippi River. During the fall, the bluffs are ablaze in brilliant color. Numerous observation areas offer great places to take photos and see the many birds that migrate through the river valley during the fall. When touring the Wisconsin Great River Road, Onalaska is the perfect overnight stop. The community offers the largest shopping district in a nine-county region and the area’s best hotels. Onalaska is also home to the Great River State Trail, a 24-mile biking trail running along the Mississippi River – it’s an outstanding fall ride.

Just south of the charming community of Boulder Junction, you’ll find Rustic Road #60. The road follows County Hwy K from County Road M to Country Road N. You’ll travel under a canopy of pines and hardwoods; the painted leaves of the hardwoods contrast beautifully with the dark greens of the conifers. Drive slowly and you’ll have a chance to see wildlife along the way. Area inhabitants include bald eagles, wild turkeys and albino deer.

Here are some other great fall driving tour options.

Traveling to Oshkosh? Learn more about these local businesses.

Brayton Bed & Breakfast offers a great weekend retreat for couples, families and other groups. Their gourmet breakfasts are made fresh every morning. They also provide sweet treats and host wine-and-cheese socials. 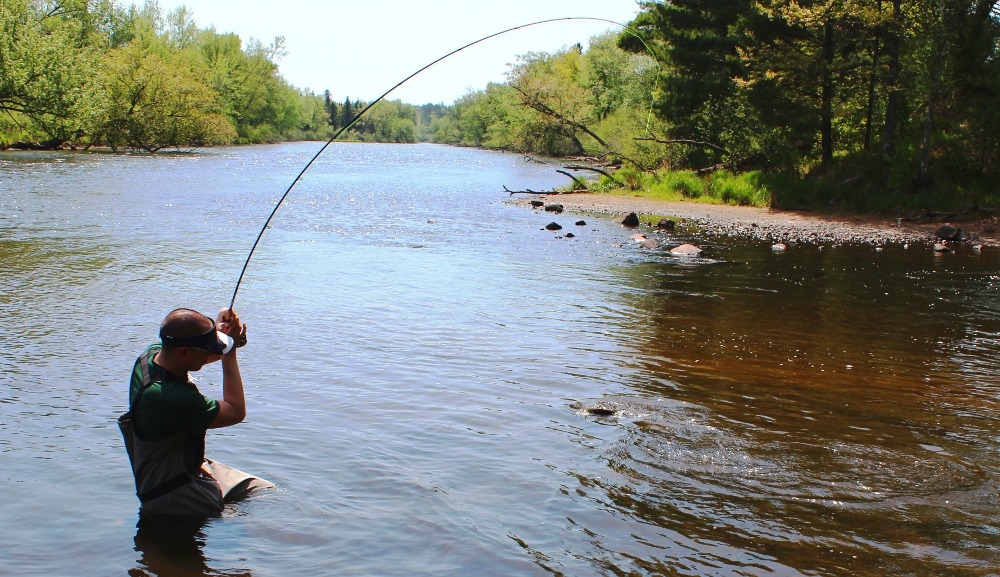 Editor’s note: As part of Wisconsin Travel Best Bets’ Shift Your Gears campaign, we have asked bloggers, writers and photographers to write about destinations across the state and share their experiences. Today, Blake Hamilton of illinoiswisconsinfishing.blogspot.com talks about his recent fishing trip to Rhinelander.

The Rhinelander area is probably most famous for its world-class musky and its endless lakes. Rightly so: Oneida County is home to just over 1,100 lakes, and these waters contain an abundance of some of the most desirable game fish in the entire state of Wisconsin. Smallmouth and largemouth bass, pike, walleye and the world-famous musky are swimming in these waters in plentiful numbers. Throw in the sprawling forests of pine and ash, and tannin waters stained the full spectrum of brown and red, and you really have some of the most unique destination fishing in all of Wisconsin.

One shouldn’t overlook the city of Rhinelander or Oneida County in general as a fly angler’s paradise. Countywide, they boast a whopping 830 miles of river, of which 129 miles are classified as trout water. There are over 50 named streams and rivers, with the Wisconsin River being the largest watershed flowing right through the center of Rhinelander. For the fly angler that prefers wading or floating in flowing water, the opportunities for both warm- and cold-water species are endless.

The Oneida County warm-water rivers are known for their smallmouth bass fishing, but they contain all of the same species of fish that are found in the lakes. A lot of fish are residents in the rivers year-round, but numbers of fish will migrate from downriver and the connecting lakes upriver to spawn. These seasonal movements are heavily controlled by the weather, water temperature and flows and are very consistent with other spawning migrations found in other rivers all across the state. Fishing below natural barriers such as dams can be dynamite, and fish tend to congregate in these areas. Pools, pocket water, and incoming creeks are also good bets. Anglers fishing the warm-water rivers should be equipped with at least a 5-weight fly rod, unless specifically targeting larger pike and musky. In that case, consider upsizing to an 8- to 10-weight rod. A floating weight-forward line will serve you well for most situations, and streamers like deceivers, clousers, buggers and leeches will take almost every species of fish found in the rivers.

In the land of monster musky, slab smallmouth and mouthwatering walleye, the trout streams of northern Wisconsin are often overlooked. Tourism promotes the plethora of lakes and flowages so heavily that finding any information on the trout fishing is near impossible. Internet searches result in nothing concrete, and it just may be that the best source of information could be the local fly shop or tavern.

The streams of the Northwoods are much more temperamental when it comes to weather. Harsh winters and summers impact the numbers of fish present tremendously, so look for best fishing after years with more mild seasons. Most streams here aren’t spring fed, so summer’s temperatures will impact the fishery, causing the water to warm enough to shut the bite down. Try fishing spring and fall for the best results. A 3-weight rod in the 6-foot range is appropriate for the smaller, brushy streams. Nymphs, dry flies and streamers are all effective, so don’t hesitate to fish in your comfort zone. Be sure to check out the Wisconsin DNR trout stream classification map for Oneida County; it will give anglers a good head start.

Tips for seeing Wisconsin waterfowl in the fall 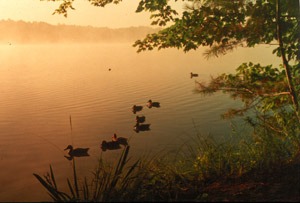 As summer winds down, birds across North America develop wanderlust. It’s time for the annual fall migration. Millions of birds will make the journey, and many of those birds will pass through Wisconsin on their way south to their wintering grounds.

But there’s one group of birds that are content to linger for a while in the Badger State: waterfowl. These birds are both easy to spot and fascinating to watch.

One reason why waterfowl are so easy to spot is their size. Compared to warblers and sparrows, waterfowl are huge. Warblers weigh just one third of an ounce, while a canvasback duck can weigh three and a half pounds. Tundra swans can weigh as much as 23 lbs; by contrast, the largest bald eagles weigh 14 pounds.

Another reason why waterfowl are easy to spot is their habitat. Waterfowl spend their time either in the air or on the water. Puddle ducks such as mallards, wood ducks and teal can be found in small groups on shallow bays and ponds. Diving ducks such as bluebills, redheads, bufflehead and ring-necked ducks can be seen out in the middle of lakes and reservoirs in large groups called rafts.

Waterfowl are fascinating to watch. In areas where there is a high concentration of geese, flocks are constantly in motion. Ducks feed actively in the fall, with puddle ducks tipping their bodies forward and diving ducks disappearing below the surface as they dive into the depths looking for food. Flocks of coot, or mudhen, run across the water when startled. Graceful swans lift their long necks straight and let out a trumpet-like song. Waterfowl are simply fun to watch.

Once you have a pair of binoculars and a birding guide, all you need is a place to see waterfowl. Wisconsin has a number of options.

One good place for seeing ducks and geese is Black River Country. This complex of wetlands in the Black River State Forest offers a number of observation points. Early in the season, mallards, teal, wood ducks and shorebirds can be seen.

Get out and see some waterfowl this fall. Waterfowl watching is fun, fascinating and easy.

This contest is now closed. Thanks to everyone who entered and good luck!

Four lucky winners will receive a weekend stay in a Stevens Point Area lodging establishment, as well something special tailored to your interests. For instance, if you’re a birdwatcher, we’ll throw in a set of binoculars and a field guide; if you like biking, you’ll take home a gift certificate from a local bike shop.