When the leaves have fallen and all the trees are left bare, most people feel a twinge of sadness. Not musky hunters. November is the season when musky fishing hits its peak. The biggest fish get ferociously hungry in the late fall, throwing caution to the wind and becoming more vulnerable to the savvy angler. 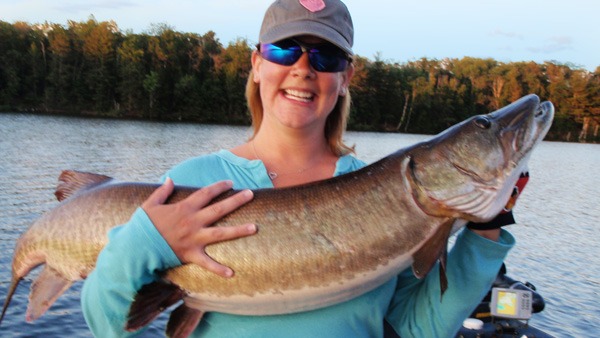 If you’re a musky hunter, you’re heart is beating a little bit faster at the thought of those behemoth fish getting ready for their late fall feast. Here are four Wisconsin musky hotspots you should fish this November.

Lake DuBay in the Stevens Point area is a 6,830 acre flowage on the Wisconsin River. Its winding channels, secluded bays and large areas of open water all combine to create ideal musky habitat. During the late fall in Lake DuBay, a musky gets a healthy appetite. Look for fish in the transition zone between deep and shallow water, particularly near the river channels. Musky can be spread out in this system, so be prepared to hunt for fish. For the persistent angler, the rewards can be an amazing catch.

With more than 50 Class-A musky lakes in Boulder Junction, finding a great place to fish isn’t very difficult. One of the very best musky lakes in the area is White Sand Lake. This small lake has a healthy population of cisco, a musky’s favorite meal. White Sand Lake’s musky grow plump feeding on cisco. In the fall when the water temperatures plummet, ciscoes head into the shallows to spawn. The lake’s big muskies follow them and you have a once-a-year opportunity at some true trophy fish. Take advantage of this fantastic fall fishing pattern.

Fence Lake in Lac du Flambeau in Vilas County is famous for its huge musky. Each fall, the 3,500-acre lake gives up some enormous fish. During most of the year, the deep, clear lake can be a challenging place to fish. But when cold weather rolls around, the lake’s monsters come into shallower water, making them vulnerable to the musky hunter’s lures. Look for the musky action to increase as water temperatures fall. By late November, the fishing should be hot.

Boom Lake in the Rhinelander Area is famous as a musky lake. And for good reason: each fall, Boom Lake produces hundreds of huge fish. Boom Lake is one of the most popular fishing lakes in the Northwoods. But by November, musky anglers have the lake all to themselves. Cast giant jerkbaits and hefty crankbaits. Multi-fish outings are not uncommon in the late fall on Boom Lake. Get out there and enjoy one of the best fishing lakes in the Northwoods.

Other musky hotspots include Lake Holcombe in Rusk County and Lake Nokomis in Oneida County.