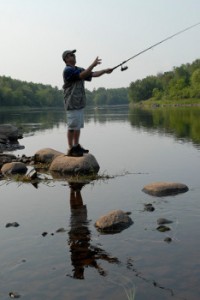 What are the best places to fish in Wisconsin? It depends on what you’re going after. Here are some hotspots for catch smallmouth bass, panfish, musky and walleye.

Wisconsin has a number of excellent smallmouth bass fishing spots. Two of the best are the Flambeau River in Black River Falls.

The Flambeau is a classic northern Wisconsin river, running through forests of hardwoods and white pine. Flambeau River smallmouth can be found in deeper pools as well as in the large flowages. Wading can be especially effective, affording you stealth and maximum control for casting and fighting fish.

The Black River is another outstanding smallmouth spot. Some of the best fishing on the Black River can be found right in Black River Falls. Look for good numbers of fish, with some approaching trophy size. Both live and artificial bait can be effective. When you hook into a Black River smallmouth, you’ll know it.

The mother of all panfish destinations has to be Lake Onalaska in Onalaska, the “Sunfish Capital of the World.” The lake is actually a pool on the Mississippi River. The bluegills and pumpkinseeds are numerous in Lake Onalaska and can get big. The best bluegill fishing can be found in the backwaters – look for places with abundant insect life and plentiful weed cover. The standard live-bait-and-float rig works well, but for extra excitement, try fly fishing using insect-pattern flies.

The muskellunge is Wisconsin’s state fish, and for good reason – the musky fishing is unbelievable in the Badger State. The two top destinations for pursuing musky are Vilas County and Boulder Junction.

Vilas County is home to a whopping 1,300 lakes. These crystal-clear lakes harbor thousands of muskies, many of them massive. Anglers should choose the lakes they fish by the style of fishing they prefer. Fans of bucktail spinners should pick shallower lakes with darker-colored water. Anglers who like casting crankbaits should select one of Vilas County’s many deep, clear lakes. So, decide what kind of musky fishing experience you’re after, pick your lake and start casting.

Located in Vilas County, Boulder Junction is suitably named the “Musky Capital of the World™.” Many of the 194 lakes in Boulder Junction are thought to be the best musky fishing lakes on Earth. One of the best and most unique lakes is Trout Lake. This huge body of water is deep and cold, producing muskies of enormous size and beautiful coloring. The lake is also home to a population of lake trout.

Oshkosh is located on the western shore of Lake Winnebago, a 130,000-acre body of water that is arguably Wisconsin’s best and most important walleye fishery. The high-quality fishing is thanks to the abundant spawning habitat in the upriver portions of the sprawling lake system. Walleye anglers fishing Lake Winnebago can expect good numbers of fish as well as an opportunity to catch some true trophies. One of the most popular ways to fish for walleye on Lake Winnebago is using planer boards, but simpler methods, such as jigging and slip-bobber fishing, can be equally effective.