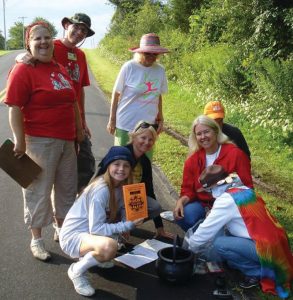 Five years ago, the picturesque community of West Bend had a secret. Hidden in trees, stashed in buildings and scattered throughout the surrounding countryside, hundreds of hidden treasures awaited discovery.

Today, the secret is out. Way out.

Beginning August 10, geocachers from across the country (and the world) will take part in the fifth annual West Bend $1,000 Cache Ba$h, the Midwest’s largest geocaching event. Organized five years ago by a coalition started by the Chamber of Commerce, the Cache Ba$h attracts thousands of GPS wielding cachers each August. Thanks in part to the efforts of geocaching royalty who call West Bend home, by 2007, the city’s parks, streets and buildings were riddled with more than 500 caches.  It was then that the chamber decided to showcase the city’s wealth of caches in an event and the Cache Ba$h was born.

The Cache Ba$h brings together serious geocachers and families for a weekend of high tech hide-and-seek. Competitors come for great prizes, including cash awards totaling $1,000, and to talk about geocaching’s latest tactics and technologies. Others make their way to West Bend for the friendly community, the challenge of some of the more hard-to-find caches and the array of family-centered activities.

Cache Ba$h organizers work hard each year to keep the Ba$h entertaining for cachers of all ages. Highlights for this year include:

So far, the 2012 event is on pace to set new attendance records, surpassing the 600 teams who participated in 2011. The event draws geocachers from across the Midwest and the world: in its first four years, the Cache Ba$h has had teams from as far off as Denmark, England, Bulgaria, South Africa and Germany.

For more information on the 2012 event, visit the Cache Ba$h website www.westbendcache.com or find them on Facebook at www.facebook.com/WBCacheBash.