A quick tour of Wisconsin’s best makers of beer, cheese and sausage 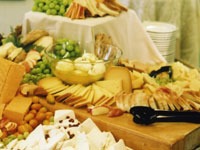 Wisconsin is famous for its uniquely indulgent culinary traditions. The state’s fascination with beer, cheese and sausage is famous throughout the nation. Watch any nationally televised Packer game and you’ll see the ubiquitous foam “cheese head” hats and hear the sportscasters going on and on about Wisconsin brats. Wisconsinites’ enthusiasm for these foods has much to do with the German and Eastern European heritage of many of the Badger State’s communities. That heritage lives on in the many breweries, meat markets and cheese makers that dot the state map. Hungry, thirsty and curious travelers will find that Wisconsin’s culinary traditions are alive and well. Here are some “must-taste” attractions for your next trip to Wisconsin.

Beer Extraordinaire
In the heart of Black River Country, you’ll find the Sand Creek Brewing Company, one of the best and most respected small breweries in the Midwest.

Tours of the brewery are free and offered every Friday afternoon at 3pm. From May through September, tours are also offered from 3pm to 9pm. Other times can be arranged if you call ahead. The brewery is located minutes from the Black River and downtown Black River Falls. Learn more about tours.

Two Magical Meat Markets
The Lake Tomahawk Meat Market in Oneida County is arguably the best butcher shop in the Northwoods. Recently, the market was featured on Andrew Zimmern’s “Bizarre World” on the Travel Channel.

The highly talented staff at the Lake Tomahawk Meat Market produce 40,000 to 50,000 pounds of sausage each year. And although they are most famous for their sausage making, their devoted customers will tell you that their jerky is the best anywhere. Their naturally smoked bacon gets rave reviews as well. If you’re in southern Wisconsin, you’ll need to head to Dodge County to get your sausage fix.

When you walk into Leroy Meats, you take a step back in time. Located in Horicon, this old-fashioned meat market specializes in having the freshest meats and making the finest homemade sausages.

The sausage that Leroy Meats is most famous for is bratwurst. They produce a staggering twenty different flavors of fresh brats. You’ll also find a full selection of cheeses from local cheesemakers, including our next featured stop on the tour – Widmer’s.

The King of Cheese

If you love cheese, you need to visit Widmer’s Cheese Cellars in the tiny hamlet of Theresa in Dodge County.

Theresa is surrounded by dozens of dairy farms and some of the most fertile farmland in Wisconsin. If you intend to be the king of cheese, it’s the ideal place to set up shop. For more than 80 years, the Widmer family has lived and worked in the same cheese factory, crafting some of world’s finest cheeses.

Third-generation cheese maker Joe Widmer reigns supreme in three particular varieties of cheese: traditional stirred-curd Wisconsin Colby, aged Cheddar and Wisconsin Aged Brick. These three cheeses have earned Widmer’s Cheese Cellars numerous awards and a huge following among cheese aficionados. People speak about the lusciousness of Widmer’s Colby with reverence. Chefs around the Midwest wax poetic about the tanginess of Widmer’s aged Cheddars. And cheese lovers, young and old, give their highest praise to Widmer’s Wisconsin Aged Brick, a variety that Widmer’s does better than anyone else.

Visitors to Widmer’s Cheese Cellars will be dazzled by more than 70 varieties of cheese as well Wisconsin-made sausages. You’ll be able to watch cheese being made as you shop. Tours are available by appointment. Try leaving without a few pounds of cheese under each arm.

The Season of Giants – Late-season Musky Fishing
Orchids and Antiques
Where Are the Walleye?
-->